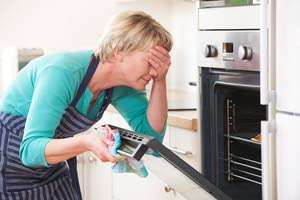 If you’re planning to entertain at home this holiday season, you’d be wise to bear in mind the words of Julia Child: “Never apologize. Never explain.”

Because something is going to go wrong. Something always does. But that doesn’t mean you need to tell the world. Her philosophy was simple. Embrace the disaster, do what you can to fix it, but tell nobody. Just serve it as is and chances are good no one will notice or care. Did your souffle fall? Call it a pudding cake instead. Are your cookies overcooked? Crumble them over ice cream.

Which is to say, there’s almost no kitchen mistake that can’t be fixed so long as you stay calm and keep an open mind. In fact, as far as I know there are only two things that are unfixable. We’ll come back to those, but in the meantime, let’s talk about some of the most common holiday cooking problems and the best ways to fix them.

The turkey isn’t done. So your guests arrived two hours ago, but the turkey has barely broken 125 degrees F. Now what? Maybe it’s time to check the movie listings? Just kidding. Sort of. This is a hard fix, but it’s not impossible. Start by making sure you are getting an accurate read on the turkey’s temperature. Use an instant thermometer inserted at the leg/thigh joint, and make sure the probe doesn’t hit bone.

Next, pull the bird from the oven and increase the temperature by 50 degrees F. Cover the turkey with foil, then return it to the oven. Check the temperature every 30 minutes, but no more than that. More frequent opening of the oven lets the heat escape, further slowing the cooking. Once you are within striking range of your target temperature (155 degrees F to 160 degrees F), remove the foil to allow for browning (unless the bird already was sufficiently golden).

In the meantime, if you are so inclined, distract your guests with an easy snack and cocktail. Plan ahead and stash some bacon and wheat crackers, as well as apple cider, bourbon and oranges. Quickly wrap half a slice of bacon around each cracker, sprinkle with pepper, then arrange on a baking sheet and bake (whatever temperature the oven is already at is fine) until the bacon just barely crisp. For the drink, spike cider with bourbon and an orange slice. Nobody will notice the delay.

How to avoid this next time? Plan better. For example, if it is recommended that you roast your 16-pound turkey at 325 degrees F for 3-1/2 to 4-1/2 hours, assume it’ll take the longer estimate. But even so, start checking the internal temperature on the early side, after about 3 hours. If the turkey’s not done, keep checking at 30-minute increments until it registers about 160 F. (Remember, the temperature will continue to rise to the needed 165 F while the bird rests).

The turkey is done too soon. If your turkey gets to 160 degrees F and your guests have not arrived yet, don’t fret. The turkey needs to rest, covered loosely with foil, before carving, for at least 20 minutes. And it will stay rip-roaring hot for up to an hour.

The turkey is dry. Turkey tends to be flavorless enough as it is, never mind when it is overcooked and dried out. To fix a dry bird, heat the oven to 300 degrees F. Carve the meat off the bird, slicing it as you would to serve. Arrange the slices, slightly overlapping, in a shallow baking pan, then pour some turkey or chicken broth over them, enough to come halfway up the sides of the slices of turkey. Cover the pan tightly with foil and heat the turkey for 10 minutes, or until it’s heated through.

Now lift out the slices and arrange on a serving platter. Ladle gravy over the slices. It will be a beautiful presentation and the meat will be deliciously moist.

The turkey isn’t carving nicely. Sometimes when you carve the bird, much of the breast meat remains on the bone. There is a reason this happens; it’s the wishbone, which blocks the knife from slicing all the way done to the rib cage. So get the wishbone out of there, then get back to carving. And the best way to carve is to start by cutting the whole breast off the carcass, removing one half-breast at a time. Then do your slicing.

Also, unless you’re a professional chef or a surgeon, I suggest carving the bird in the kitchen (where there are no spectators).

The beef or pork is overcooked (or cold). This one is easy. Start by heating some of whatever gravy you have on hand. If it appears there might not be enough, stretch it by adding a little beef or chicken broth (or, in a pinch, water). Slice the meat thin, arrange it in overlapping slices on the serving plates (do all of this out of view in the kitchen), then pour a liberal helping of hot gravy on every serving.

The sauce looks greasy. This is because the fat and other liquids are starting to separate. Just return the sauce to the pot over low heat and whisk in a little water. It should become emulsified and smooth again in no time.

The gravy is lumpy. Pour the gravy through a mesh strainer and discard the lumps. Alternatively, portion the gravy into a blender in batches and puree until smooth. But when working with hot liquids, never fill a blender more than a third full.

The mashed potatoes are lumpy. Leave them be and call them “rustic” or “smashed” potatoes. Continuing to mash the potatoes will risk overworking them and can make them gluey. (See the dire warning about gluey potatoes below.)

The green vegetables are overcooked. Pop the vegetables into the food processor and pulse until they are finely chopped. Now mix them into the mashed potatoes, rebranding the dish as “Brussels sprouts potato mash.” And by the way, that example is particularly delicious if you happened to toss some bacon in with the overcooked Brussels sprouts.

Or, if the meal could use a first course, turn the veggies into a soup. In a blender, combine the overcooked vegetables with some milk, broth or water, a little garlic and some cheese, then pureeing until smooth. You also could stir in a spoonful or two of mashed potatoes for thickening, then garnish the soup with toasted seeds or nuts. You’re a genius.

The pie falls apart or the crust crumbles. Spoon it into wine glasses in alternating layers with a bit of ice cream or whipped cream and call it a pie trifle.

The whipped cream is over-whipped. If the whipped cream starts to look dry and grainy, just add a little more cream and carefully beat it until soft peaks form. Then stop. You’re done.

Alternatively, assuming you have enough heavy cream to make a second batch, keep beating the first batch until the cream completely breaks and forms butter (and liquid, the buttermilk). Drain off the buttermilk (save it for pancakes the next morning) and season the butter with salt. Serve it with the dinner rolls. It will be the best butter you’ve ever eaten.

The cake is dry.  Make a simple syrup by combining equal parts sugar and water and heating them in a saucepan over low heat until the sugar is dissolved. If you want to flavor the syrup, add vanilla, lemon zest or juice, orange zest or juice, brandy or another liqueur. Brush the syrup liberally over the layers of the cake before assembling. Or slice the cake and drizzle the syrup over each serving.

Or you can make a quick raspberry or strawberry sauce by combining some frozen (thawed) berries with a little sugar in a blender. Puree it all, then strain the puree to remove the seeds. Pour the sauce over the cake slices, top each portion with ice cream and call it cake a la mode.

The cake/cheesecake/pumpkin pie is cracked. You can camouflage the cracks by decorating the top of the dessert with lightly sweetened whipped cream (preferably piped on using a decorative tip) or by dusting it with powdered sugar shaken from a mesh strainer. And if you want to get fancy, pick up a paper doily ahead of time. Place the doily over the cake and dust with powdered sugar over that. Beautiful! Either quick fix should be done at the last minute because the whipped cream eventually can get watery and the powdered sugar will weep if it sits for too long on top of the cake.

There are really only two kitchen errors that can’t be easily repaired. If something is burned — and I don’t mean just singed or browned on the bottom — it’s going to taste bad pretty much no matter what you do to it. You could try telling your guests that you smoked it, but the chances are they’ll know the terrible truth. Your only real choice is to toss it out and serve more of the dishes that weren’t burned. Or order out for pizza.

That said, a slightly burned turkey sometimes can be saved. If it’s mostly the skin that took the heat, carve the bird (in the kitchen!), discard the skin, then use the broth technique described above to bring back some moisture. But if the meat itself is burned… Well, everyone loves the sides most, anyway.

The second mistake that can’t be undone — overmixed, gluey mashed potatoes. I made this mistake many years ago and I’ve never forgotten it. It was Thanksgiving and I’d just begun attending cooking school. I volunteered to cook the whole big meal myself at my sister’s house. She didn’t own a potato ricer, food mill or even a plain old potato masher. So when it was time to puree my potatoes, I reached for the food processor… and ended up with wallpaper glue.

If this happens to you, please understand that the potatoes are dead and you’ll need to cook up something else to absorb the gravy. If you have enough potatoes, just cook up another batch. And if time is running tight, cut the potatoes in 1/2-inch pieces before boiling them; they’ll be done much faster. Alternatively, grab a box of pasta (preferably orzo or macaroni), boil it up, toss it with butter and Parmesan and brightly inform your guests that you just felt like going Italian this holiday.